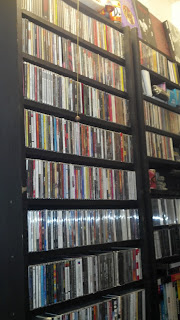 I own close to 2000 compact discs. My collection is worth about, let’s see, carry the four, divide by 7…nothing.  It’s a diary of my life.  From Triumph’s Sport of Kings which was my virgin CD purchase up to the Threefold Law & Chris E. collaboration (Smoke) we just released, those plastic circles represent milestones in my life.  But on the open market, the 2000+ recordings sitting in my attic are completely worthless.  With the exception of a rare import or a signed Justin Bieber disc, I’ll bet your collection is also potential landfill.

It all started about 100 years ago.  Prior to the 20th century, for thousands of generations, humans enjoyed music much the same way we do today.  It was spiritual, therapeutic, emotional, or just plain fun.  A pioneer of audio recording, Alan Lomax, was one of the first to record musicians, capturing their music on vinyl.  For the first time in human history people could enjoy music without being present in the time and space in which it was performed.  In the 1940s and 1950s, good ole American capitalism took over and corporations figured out that post-war American teenagers (and their parents) had disposable income and they couldn’t get enough of that Rock and Roll.  Fast-forward a few more decades and you have the golden era of music consumption heralded by major record labels and a worldwide audience hungry enough to drive platinum (one million records) and multi-platinum sales.

This is when we were duped into believing that MUSIC and the MEDIUM are the same thing.  Vinyl, magnetic tape, shiny plastic discs, and binary code are NOT music.  They are, and have been, the medium by which artists share their music.  Gatefolds, album artwork, liner notes; these are all as interesting as the back of a cereal box unless they are associated with the music.

Before the vinyl lovers crucify me, let me state that there will always be folks that love the act of collecting.  They are no different than CD aficionados (like me) or digital hoarders with bloated iTunes libraries.  This argument is irrelevant and I wish we’d put it to rest.  Our newest technologies have changed this forever.  Mog is a company that gives you unlimited listening to over 15 million songs on any device you own for $9.99 month.  You don’t own the music (although “owning” music is like “owning” a suntan).  You pay to listen to as much as you want, and in fact, more than you can play in a lifetime.  It’s a subscription service like Netflix.  The medium is forever irrelevant, ceasing to exist altogether.

“Wait!  You’re a musician!  You’re trying to sell Threefold Law records.  You should be outraged.”  Mog is not selling files or providing illegal downloads.  Artists receive a royalty every time a song of theirs is played.  Not much, but with a potential global audience.  Again, it doesn’t matter what you or I think.  Every sales statistic in every entertainment market reporting nose-diving sales for products reliant on the physical medium.  CDs, books, and DVD sales are all in the toilet while iTunes, Amazon, and Netflix show exponential growth from the sectors of their business that has abandoned the medium.

For the first time since the invention of Edison’s phonograph we can see again the distinction between music and medium.  If you care more for the medium, then the future of music looks dire for you.  You and your hipster buds can dress in skinny jeans and flannel shirts, visiting the last remaining vinyl shops to discuss why that latest Arcade Fire album sounds so much better on your grandpa’s shitty turntable.  You and your pudgy 80’s metalhead friends from high school can continue ordering import CDs from Europe to impress each other in the 7 Eleven parking lot.  You and your vapid, shallow, classmates can one-up each other with the number of songs you have on your iPhone.  It’s irrelevant because that’s medium not music.

The future of music creation and distribution belongs to companies like Mog, whether you like it or not.  I’m not sure how I feel about it yet, but I know I can’t fight it any more than I can control how I get to work each morning. I bitch and moan about gas prices and then drag my ass to the pump.

Anyone wanna buy some used CDs?

3 thoughts on “Show me yours?”