I’d like to give the middle finger to Citibank. When I first moved to New Jersey in 1994, I opened up a checking account and credit card account with them. Over the years I’ve been a loyal customer, never once late with a payment. Never once did I splurge at Guitar Center and then claim my card was stolen. Not a single issue for almost 20 years. Since the financial collapse of 2008, I have been actively closing my accounts with the irresponsible institutions that took bailout money. For example, I refinanced my mortgage which was held by J.P. Morgan Chase and closed a Bank of America credit card account. For some sentimental reason, I kept my Citibank credit card even though I didn’t use it much anymore. Apparently that lack of activity caught the computer algorithm’s eye over at the Citibank mainframe.
Last week, I received this cordial and personalized letter from “Your Customer Service Team”. This is the courtesy Citibank extended to me for being a loyal customer for 19 years. No auto-generated email warning, no form letter, no robocall, and certainly no contact from a human being which they clearly eliminated from their customer support center unless you call during the rush hour in New Delhi. You’ll find “Frank” to be a bit less helpful than you’d like. Nope, I got none of that. Not even an overseas call from “Sally”. They were kind enough to print an 800 number on the letter should I be interested in any of their other services. I mean, the customer service was so fantastic on this credit card account, how could I resist!

If you’d rather not take the time to read their letter, here’s the short version of it:

Dear dickhead,
Your account is closed because we can’t suck any more finance charges from your flat teat.

From,
Your Customer Service Team

They have the right. I’m not claiming they don’t. But this is exactly why those huge douchebags on Wall Street will not make another dime off of me as much as I can help it. So long, Bank of America. Goodbye, J.P. Morgan Chase, and Citibank. 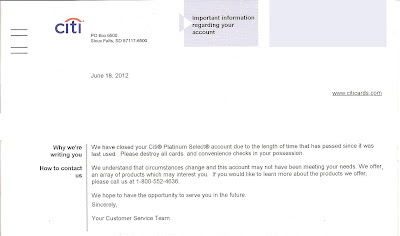