While many complain about the degeneration of society at the hands of those damn Interwebs, a few things have changed for the better. Social media and the internet has forever altered our culture, allowing people that used to be considered “outsiders” or on the fringe (like me) to find other like-minded freaks.

Case in point: Suicide Girls. For those of you that have never heard of SuicideGirls.com, what the hell is wrong with you? It’s only the planet’s largest website full of kick ass women that a generation ago would not have met the traditional definition of beauty.

“With a vibrant, sex positive community of women (and men), SuicideGirls was founded on the belief that creativity, personality and intelligence are not incompatible with sexy, compelling entertainment, and millions of people agree. The site mixes the smarts, enthusiasm and DIY attitude of the best music and alternative culture sites with an unapologetic, grassroots approach to sexuality…In the same way Playboy Magazine became a beacon and guide to the swinging bachelor of the 1960s, SuicideGirls is at the forefront of a generation of young women and men whose ideals about sexuality do not conform with what mainstream media is reporting.”

The women are tattooed, pierced, dyed, and even dreadlocked. SuicideGirls.com embraces a female image that doesn’t conform to the unrealistic standards set by Playboy, which in fact they outnumber in paid subscribers according to my guest.

Smayx is one of the models representing the CLE on Suicide Girls. She is soft-spoken with a playful wink in her eye. She enjoys Elvis Costello, 80s movies, and long walks on the beach (I’m making that last one up although it sounds like it fits). Smayx was kind enough to talk to me about tattoos, country music, and Suicide Girls. Did I mention she’s a Merle Haggard fan?

Allow me to introduce you to Smayx, Suicide Girl extraordinaire from the CLE.

J: Where are you from?

S: I was born in Florida but raised in Cleveland. In Parma.

J: What is a Suicide Girl?

S: Everybody’s an individual and you can be yourself. There are all different kinds of girls on Suicide Girls; ones with a lot of tattoos, ones without any, ones with piercings, ones with crazy colored hair, and ones with dreads. Pretty much you’ll find everything. If you’re a guy or a lesbian, you’ll find at least one person on there for you. It definitely has a good group of girls and we’re really close as well.

J: Is there something common between all of you? Is it the tattoos, is it the piercings?

S: I don’t know because all of the girls are unique in their own way. They do ComicCon and that kind of stuff too. So you usually find girls you’ll have something in common with and other ones maybe not as much, but you’ll still find something.

J: How many Suicide Girls are there?

S: I don’t know the exact number but I know there’s one in literally every country. I know in Columbus there’s at least thirty.

J: Do you know any of the history of Suicide Girls?

S: Missy Suicide came up with the idea. She was doing pictures of her friends and that idea led to the website. It started from there and now Suicide Girls has more subscribers than Playboy.

S: A lot of people have asked me about it and that’s the best way to describe Suicide Girls; the tattoos, piercings, crazy hair, that kind of thing–kind of alternative.

J: I’m only there for the articles, the editorials, and blog posts. [laughing] There’s other entertainment too, right?

S: Yes and they have groups you can join if you have a topic you want to talk about. That’s how you meet a lot of girls as well, by joining the groups.

J: I did an interview with Erin Lung from Rebel City Tattoo. We talked about the tattoo culture and how it’s changing. He told me this funny story about a mother and a daughter coming in to get tattoos in really private places. He believes tattoos are becoming more and more mainstream. Do you agree with that?

S: I feel there are types of tattoos that everybody gets; very generic ones. Those are the ones I try to stay away from.

S: The little hearts and the stars and the butterflies and those types of things.  I have one heart on me and it means something, but besides that I try not to do the normal. I try to think outside of the box and get tattoos that have meaning.

J: So all your tattoos are meaningful to you?

S: Yeah, there is a significance behind every single one of my tattoos that I’ve ever had done. I got my very first tattoo for my 18th birthday. I got it for one of my best friends that passed away when I was young.

J: How do you interact with the users on SuicideGirls.com?

S: We have the internal messaging. I have met some people in real life and then found out later that they were on Suicide Girls too, so that was kind of cool. If you go to any of the parties you’ll meet more people that are on the site; the last one that I went to had like hundreds and hundreds of people. It was crazy. It all just depends.

J: What do you listen to?

S: I have a broad taste in music. I go from like the Kottonmouth Kings, to As I Lay Dying, to country. I literally like just about everything as far as that goes and I’m a huge Elvis Costello. In This Moment is another band that I love.

J: Do you have some say in what shows Gorilla brings to town? Can you book the bands you like? [Smayx works for Gorilla Music]

S: Each of the booking agents have their own shows that they specifically do. Bryan Pauley is doing the one show and I’m just kind of helping him out with that because I’m the one who came up with doing a Suicide Girl thing. We did the foam party last year, so this is the second year in a row, and this year we’re adding Suicide Girls to it.

J: What is your favorite movie?

S: I can’t even pick a favorite movie. [laughing]

J: What about a favorite type of movie?

S: I can’t do that either. [laughing] I like Twilight, the Breakfast Club, and Pretty in Pink. All the older ones, but those are so good.  Those are probably my top three that I can think of at the moment.

J: You’ve got an 80s thing going on with the Elvis Costello and the movies.

S: Those are some really good movies though.

J: What draws you to that decade?

S: I don’t know. I just think a lot of the stuff was better at that time than it is now, at least as far as movies are concerned.  There are some movies out now that I love, but not a lot.

J: If someone was looking at your profile on Suicide Girls, what’s not on there that might surprise them?

S: Music tastes change all the time; some people would be surprised that I like country.

J: I think there’s probably a perception that people with tattoos and piercings like extreme stuff like heavy metal—not something that seems so much more “wholesome” or “normal.”

J: You get into old school country too?

S: I grew up on that. That’s all my parents would listen to. My dad was into Merle Haggard and that kind of old school stuff.

J: Was he a musician or a fan?

S: A huge country fan that was raised in Louisiana, so that’s why he likes country.

J: He’s not a native Clevelander.

S: She was born in Alabama but she was raised in Cleveland.

J: You have some southern roots.

J: Have you ever travelled to see any of your dad’s extended family?

S: I have. My dad passed a few years back so I went to go see where he grew up, in Louisiana. It was a bit different. I liked it a lot more than I thought I was going to.

J: New Orleans, Louisiana or the backwoods of Louisiana?

S: More like the backwoods. My mom told me that there’s a show called Duck Dynasty and my dad is from that city. I’ve never watched it but my mom’s says it’s nothing like that.

S: There’s diversity here; all different kinds of people. No matter where you go you’re going to meet somebody different, so that’s kind of cool. That’s what I think.

J: Thanks for your time. 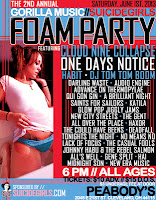