Pat Butler used to get high on a daily basis before budget cuts pulled him from the helicopter where he called out traffic like highway bingo for WKYC. Now, he does it from behind a big monitor. Pat is also a guitarist and front man for the local rock band, SIGNAL 30. I met him years ago when SIGNAL 30 and Threefold Law began playing the same clubs in Cleveland. In addition to a cadre of massive amp cabinets, Pat travels through Cleveland with a six pack of tacos.

Who would be more likely to win a wrestling match with a bear, Russ Mitchell or Kris Pickel?
Can’t answer this one. I really don’t know either of them personally. I met Russ briefly when he came to town though. He seems to be a super nice guy.

Do you get paid more if the traffic is worse?
I wish. I barely get paid anything as it is. I should’ve gone into computers. My uncle John used to always tell me that computers are the future!

How did you get from the mean streets of Parma to WKYC?
I just kind of fell into traffic reporting. We started our own traffic department at the radio station years ago, and I overheard the Program Director mentioning that he hadn’t received any decent demo tapes yet. 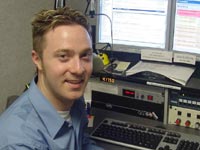 I was working in the promotions department at the time, and I asked him if the traffic gig would pay more than what I was making. He said yes, so I told him I’d hand him a demo by the end of the day. You can figure out the rest.

When I was growing up I loved staying up late listening to college radio in my bedroom. When I was finishing HS, I applied to John Carroll solely because I wanted to do a radio show at 88.7. I was lucky enough to get my foot in the door at Clear Channel while I was finishing up my Communications degree. I always hoped to host my own show at some point, but Traffic is a decent job. It beats digging holes, in the rain, in 10 degree weather, with a bad back.

What’s the future of terrestrial radio? TV?
The kids today have no idea. No idea of how good radio used to be. A lot of the personality, creativity, and spontaneity is gone. So, as they grow up, they won’t even know what they’re missing.

People will always need some kind of local input though, so I can’t imagine it going away entirely. Things will just get more and more homogenized. I’m really not much of a TV watcher. Is Gimme a Break still on? That was a sweet show. 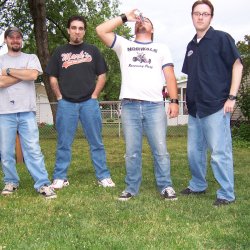 Why Cleveland?
I’m too lazy to pack up all my crap. Plus, I love Dollar Dog nights at Tribe games!

Where can folks see you?
You’re guaranteed to catch me on the toilet at 2PM daily. Like clockwork.
Or on Ch. 3 in the early morning. Or on a stage with SIGNAL 30. Or eating tacos on Tuesday nights.