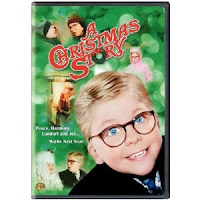 A Christmas Story is the Woodstock of holiday movies. Everyone claims to have seen it in the movie theater in 1983 and yet that is not true. I can honestly say that I did. My old man took me to a moldy, dilapidated, single-screen theater in Butler, Pennsylvania on the Sunday night after Thanksgiving. I was 12 and getting ready for my first experience hunting buck in Western PA. I was about [sarcastic gulp] to become a man. We decided to go to the movies the night before Opening Day and see the only PG movie playing. At the time, I was slightly amused by the film. Most of the humor came from my dad’s childhood, not mine. I begged Santa for video games, not Red Rider BB guns. As I grew up and TBS started pummeling us with 24 hours of A Christmas Story, I began to like the movie. Now I love it. I’m not a Christmasy-kinda guy, but Christmas Vacation and A Christmas Story always get me in the mood for annoying relatives and rooms full of screaming kids.

This past week we visited the wonderfully sketchy, I mean, trendy neighborhood of Tremont on Cleveland’s west side. Calm down hipsters; I’m only joking about Tremont. Sort of. Drive to 3159 West 11th Street and you’ll be greeted by a most spectacular site. There, between the “parking attendant” charging ten bucks for a space on his front lawn and the “museum” across the street, sits A Christmas Story House in all of its restored glory.

The wonderful glow of the Leg Lamp beckons from the front porch while the barking echo of the Bumpuses’ dogs can be heard in the distance. Stroll through the living room, complete with a Red Rider BB Gun and blue bowling ball under the Christmas tree. Go into the kitchen and hide under the sink like Randy did. Stand in the bathroom and stick a bar of Lifebuoy soap in your mouth or pick up the rotary phone where you can still hear Schwartz’s mom screaming about her son’s alleged dropping of the F-bomb.

They shot most scenes of the home’s interior on a sound stage in Toronto. However, the house at 3159 West 11th was used in pre-production for wide angle shots of “Cleveland Street” and owner Brian Jones used each and every frame of the film to restore the entire structure to the way it appeared in the movie. Jones, a San Diego entrepreneur, bought the house off of eBay in 2004 for $150,000 and spent a quarter of a million dollars restoring it.

A Christmas Story House draws fans from around the world. If you time your visit just right, you might even get to meet Jim Moralevitz. He starred as the delivery guy that brought the “Major Award” to the front door. To this day, I pronounce fragile as “fra-GEE-lay”. It must be Italian.

I usually tag interesting people with #KickassKleveland but I think you’ll agree that this house probably deserves it. “You’ll shoot your eye out kid. Merry Christmas! HO! HO! HO!”

Sign up for my free newsletter before midnight tonight for a chance to win a $25 Amazon gift card. No lie. Drink your Ovaltine.