In Search of the Honey Island Swamp Monster 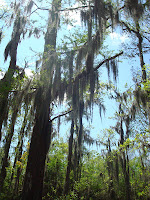 In March of 2009 I traveled to Louisiana on a quest to find the Honey Island Swamp Monster. While I cannot claim to have photographed the elusive beast, I did tour the Honey Island Swamp in a small boat that allowed me to experience the creature’s pristine, primitive, habitat. Deep inside the cypress swamp, wildlife such as alligators, bald eagles, herons, egrets, and feral hogs coexist in one of the country’s most unique and untouched environments. Getting to the Honey Island Swamp is not easy and without a guide, it could be downright dangerous. The marsh is an hour or so drive from New Orleans in St. Tammany Parish and is bordered by U.S. 90, the Pearl River, Lake Borgne, and the West Pearl River. 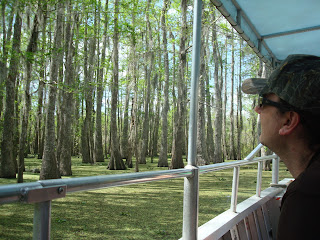 According to local legends, in the early 1900s a train carrying circus animals crashed in the swamp and the chimpanzees escaped to interbreed with the alligators. This unnatural union created a new animal, the Honey Island Swamp Monster. Others claim there is no evidence to support the creature’s existence.

After Harlan Ford’s death in 1980, a reel of Super 8 film supposedly showing the Honey Island Swamp Monster was discovered. Since then, Ford’s story and the mysterious creature have been featured in many television specials, most notably the March 4th, 1978 episode of “In Search of…”.

Harlan Ford’s granddaughter, Dana Holyfield-Evans, continues to search for it and has a site dedicated to The Honey Island Swamp Monster.

Why was Harlan Ford called the Monster Hunter?

In 1963, Harlan Ford and his hunting buddy, Billy Mills came face to face with the legendary creature.

“I wouldn’t have shot it unless I had to,” Harlan stated.  “Because, it looked almost human.  But it wasn’t human.  It stood about 7 feet tall, and had long, greyish hair hanging around its face. I will never forget its eyes.  They were large, amber colored and menacing.”

Both hunters were stunned at what was staring at them in the clearing.  They reached for their riffles that were strapped over their shoulders.  Before they could take aim, the bipedal creature ran off on two feet.

Harlan Ford was not the only eye-witness!  I have met over 13 people who have claimed to had an encounter with the Honey Island Swamp Monster.

That incident didn’t keep the Ford and Mills from hunting and fishing the swamp.  They were just more prepared. Harlan began bringing his Super-8 camera with him that he used often to photograph wildlife in the swamp.  He kept it close in case he ever came across “IT” again.  They kept the camp doors tied shut with nylon rope at night. The remaining years of Harlan’s life was spent still in search of the Honey Island Swamp Monster.  He passed away in 1980.  It was years later, while making this documentary film, that we discovered the old Super-8 Footage that was captured by Harlan from a tree blind.

While I did not come face-to-face with the hairy, smelly, monster in 2009, I hope to revisit the Honey Island Swamp again and try to capture photographic evidence of our mysterious, bipedal cousin.

*Special thanks to Angus Khan for introducing me to the legend of the Honey Island Swap Monster.

HIS by Threefold Law

2 thoughts on “In Search of the Honey Island Swamp Monster”