How to Keep Demons From Crawling Up Your Nose. Gesundheit. God Bless You. Sláinte. Salud. Whatever. 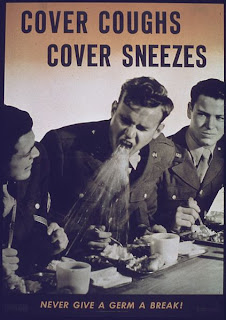 I find traditions and customs especially annoying when we do them “because we’ve always done them.” So let the snot fly. I’m not necessarily talking about the sneeze but the exchange that follows booger blow in the company of others. Why the hell am I blessing you? Am I really qualified to conduct said blessing? And if you’re not a member of an organized faith, why are you responding in German?

I pursued this knowledge like a true historian: I Googled it on my phone.

Wikipedia says that “… the custom originally began as an actual blessing. Gregory I became Pope in AD 590 as an outbreak of the bubonic plague was reaching Rome. In hopes of fighting off the disease, he ordered unending prayer and parades of chanters through the streets. At the time, sneezing was thought to be an early symptom of the plague. The blessing (‘God bless you!’) became a common effort to halt the disease.” Or another possible explanation is that “…a person’s soul could be thrown from their body when they sneezed, that sneezing otherwise opened the body to invasion by the Devil, or that sneezing was the body’s effort to force out an invading evil presence.” And yet “…another legend holds that the heart stops beating during a sneeze, and that the phrase ‘bless you’ encourages the heart to continue beating.”

The Devil? Evil forces? Feels like a mini-exorcism. There’s no way the Church would condemn a normal bodily function in the belief that it would send you to Hell, so I dug a little deeper. Snopes.com came to the conclusion that, “…we do it because we’ve been taught this is an obligatory response whose omission would seem glaring. We ‘bless’ out of a desire to not be perceived as impolite, a perception that would take root if the sneeze were to be received in silence.” 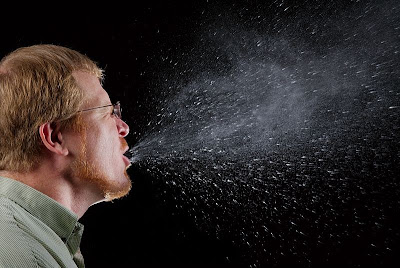 Manners? Not to be accused of superficial research, I consulted a third source, J. J. Askenasy – “The History of Sneezing” from The US National Library of Medicine Postgraduate Medical Journal. He uncovered somewhat contradictory (and gross) discoveries about the history and symbolism of sneezing. “The Babylonian Talmud points out that sneezing in women is a sign of impending menstruation.” That is certainly another way of describing the monthly visit. “The Greek philosophers of the fourth century…raised the question as to why the other types of air that emanate from the body, namely flatus and ructus, are not considered to be holy. They rationalized that only sneezing comes from the principal and most divine organ – the container of the spirit.” In my family, we blessed burps and farts so I have to respectfully disagree with Demetrius of Phalerum. “During the Middle Ages…the sneeze gained strong momentum by the Bubonic Plague…In this epidemic, people suddenly died while sneezing…Pope Pelagius II died in this epidemic while sneezing.” Now we’re getting somewhere! Add the phrase, “God bless you” to the thousands of things Catholics do because they’re told to. And from the Near East we have an explanation that just happens to come from the land where opium is prevalent. “Indian people were grateful and satisfied when they sneezed…Naswar Sunghani is a snuff of refined tobacco which produces explosive sneezing.” Askensay concluded that, “…when isolated, the sneeze is a physiological defence reflex by which we eliminate foreign undesirable material from the nasal cavity. When repetitive, it is a sign of a pathological process and is considered a threat. It is at this point that the historical circle of sneeze closes.”

And when the circle of sneeze closes you’d better pray you’re not inside it. God bless you.

12 thoughts on “How to Keep Demons From Crawling Up Your Nose. Gesundheit. God Bless You. Sláinte. Salud. Whatever.”